Apologies to the late John Lennon for appropriating his doggerel opening to The Two of Us.  Sometimes, the subject heading to one of these posts just pops into my head, and this was it.  John actually said, “Phase one…” but that doesn’t fit.

My reason for thinking of Phase II is that as a follow-on post to my previous entry, I have now taken the stage twice at the open mic night, and so now I’m no longer a first-timer, and am now moving into the “veteran” category!

Having a time constraint has caused me to focus more on shorter tunes, rather than the long, extended improvisations I’ve conducted in the privacy of my home.  This is a bit of a change, as I now have to work in a song introduction, play, repeat, and leave the stage.  I’ve been using a timer to practice, and that’s helping.

There’s also my voice.  When singing at home, it makes no difference if one is in the shower or the living room; there isn’t an audience, so hitting sour notes or a cracking voice aren’t issues.  But off-key singing in concert is most definitely a turn-off.  So, I’ve started using a capo (something I’ve looked down my nose at until recently).  This lets me change the key of a song without having to change the fingerings I know.

Thus, when I took the stage, I wanted to play songs I’ve known for a long time, that I like musically, and felt comfortable playing.  My first choice was David Crosby‘s Triad, a song I first heard performed by Jefferson Airplane on their Crown of Creation album (still one of my favorite “oldies” albums). It wasn’t until I heard Crosby’s performance of it on the live, 4 Way Street double album by Crosby, Stills, Nash and Young that I fell in love with the guitar work! The problem I’ve had with this song is that I cannot sing it in the key in which it’s written, and it uses the upper part of the guitar neck, so I’ve never cared to use a capo to adjust it to my voice.  Until now.  I found that by placing the capo on the third fret, I could sing with the music and still reach the upper frets.

However, I felt to make that easier, I needed to use a guitar that allows easier access to the higher notes, and that meant using an acoustic guitar with a cutaway.  Given that this was going to be an all-acoustic (no amplification) performance, I wanted a guitar that would also project well.  Hmm.  I had purchased a Martin OMC-15ME that, once I received it, did not love.  It went into a case and I mentally put it on my “sell” list.  Maybe it would do? 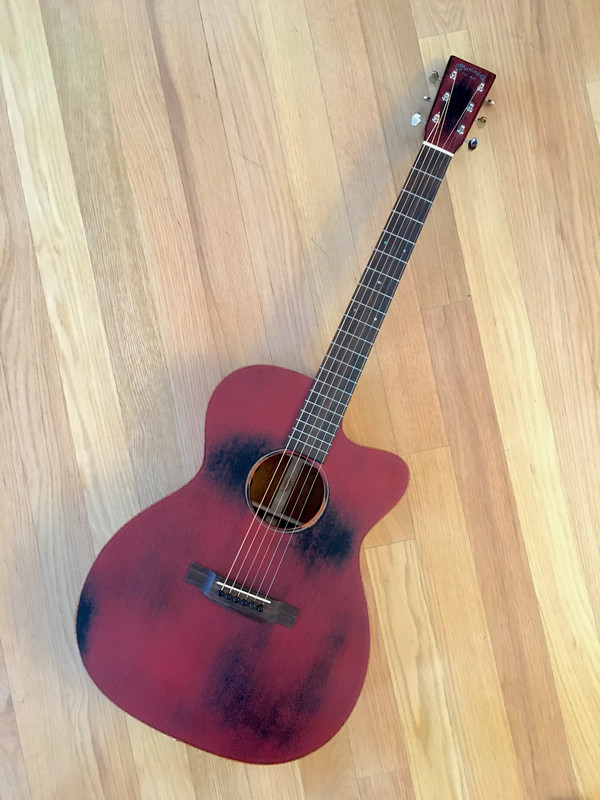 I took it to Melodee Music, hoping to buy a truss rod wrench to give it some neck relief.  They didn’t have one in stock, but the tech there offered to do the job, and so I drooled over other guitars while he did the job.  And it did the job!  I now found the guitar playable.

So, I capo’ed and practiced, and took the stage.  I introduced the song and played it, blowing the lyrics on the first chorus, but I just surged through it to the end.  I then introduced my second song (sans capo) by saying that my last attempt at a sing-along hadn’t worked too well, but if folks knew the lyrics, they could sing along now.  Then I played the Beatles‘ Maxwell’s Silver Hammer, which I completely nailed!

I got some exuberant applause, which is more than just polite acknowledgment, which made me feel pretty good!  After the show, the emcee came to me and complimented me by saying I was a “monster” guitar player.  Given that he’s no slouch on the instrument himself, I considered that terrific praise!

We’re now heading into the holiday season, and I’d like to play at least one instrumental I learned last year, and have been getting familiar with again, Bing Crosby‘s (no relation to David) I’ll Be Home For Christmas.  I’m also focusing on another Beatles (Paul McCartney, actually) song as performed by the British duo, Peter & Gordon.  I haven’t yet decided between World Without Love, I Don’t Want to See You Again, or the Beatles’ No Reply.

But I have a week to decide.  And practice.